In light of February being Black History Month, I was inspired to write a post about African heritage in Latin America. Although many are familiar with the strong African presence in areas like the Caribbean, there are other regions that also have influential Afro Latino histories, communities, and heroes. The following examples reflect a few of these perspectives that may not be as well known.

This month, members of Colombian hip-hop group ChocQuibTown were interviewed by Univision anchor man Jorge Ramos on the popular television program Al Punto. The group spoke about the challenges of being Latinos of African descent, racism, and how they use music as an expression of their heritage and pride. The lyrics from their award winning song, “De Donde Vengo Yo (Where I Come From), reflect the sentiment of the group’s home province of Choco, part of Columbia’s predominately Afro Pacific Coast. Seventy percent of Choco’s residents live on less than one dollar a day.

“We are living the hardship of Choco’s ‘development,’ ” explains bandleader Carlos “Tostao” Valencia in a recent AP release. “From the corruption to the natural disasters – and always molding our music with it.”

In November, ChocQuibTown won a Latin Grammy for Best Alternative Song and was recently nominated for a Grammy in the category of best Latin-Rock/Alternative Album. The group is currently recording their next studio album and plans to feature Puerto Rican hip-hop icon Tego Calderon. Calderon is also a Latino artist of African heritage and often expresses socially conscious messages about the negative effects of racism.

For many Afro Latinos, like the members of ChocQuibTown, ancestry can be traced between the 1500’s and 1800’s when individuals from Africa were brought to the Americas against their will during the slave trade (a movement commonly known as African Diaspora). According to the Institute for Cultural Diplomacy, Latin America and the Carribean were the first regions of the Americas to be populated by Africans, even before European exploration. Many nationalities in Latin America have been influenced significantly through this historical context and have strong ties to African culture – sometimes even more so than in North America.

In the U.S., the National Museum of Mexican Art in Chicago curated an exhibition in 2006 entitled The African Presence in Mexico: From Yanga to the Present. The exhibition, which recently finished a national tour, features paintings, sculpture, and folk art that focuses on Mexico’s influential but relatively unknown African roots. Gaspar Yanga, mentioned in the exhibition’s title, was the African leader of a slave rebellion in the Veracruz region of Mexico during the early 1600’s. Yanga also established one of the Americas earliest free African settlements in Mexico.

In an article from Time Out Chicago, the National Museum of Mexican Art’s director Carlos Tortolero emphasizes the importance teaching about Mexico’s African history. “We know about the Africans of Jamestown, but not Yanga,” he states. Tortolero also mentions that Mexico’s second president, Vicente Guerrero, was of African heritage and outlawed slavery in 1829. 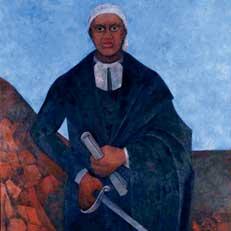 Another little known fact from Mexico’s history that is addressed in the exhibition is brought to light by celebrated contemporary artist Rufino Tamayo. José María Morelos, the famed revolutionary priest who fought for Mexican Independence, is the subject of a Tamayo oil painting that portrays him with dark African features. Many are unaware of Morelos’ African heritage and the revolutionary hero is often portrayed in images with a lighter complexion.

What can we learn from these insights and how can they help improve connections to Latinos? Often, when we discuss marketing and outreach to Hispanics, many topics revolve around the culturally relevant insights that define the Mestizo experience – those Latinos whose indigenous and Spanish backgrounds reflect the largest groups of U.S. immigrants. Although these are important insights, marketers may be wise to also consider different perspectives of Afro Latinos. These perspectives have had a tremendous influence in both Latin America and the U.S. and will continue to do so in the future.