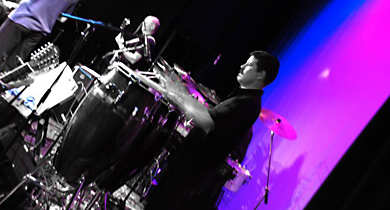 Sitting in front a trio of congas, Grand Rapids based musician and band leader Robert Mulligan counts off the rhythm to Todo Tiene Su Final. His band, the regionally recognized salsa orchestra Grupo Ayé, breaks into the Hector Lavoe classic while the audience below jumps onto the dance floor. The band delivers another stellar performance and leaves the dancers shouting for more.

West Michigan attorney Michael Gardiner shakes hands with a family from Guanajuato, Mexico and then invites them into his office for a consultation meeting. Before delving into business, he spends a few minutes asking about the family’s hometown and shares his experiences of living in Mexico. Although Michael speaks fluent Spanish, a connection is made with the new clients that transcends language.

People like Robert and Michael represent what I refer to as “honorary Latinos”. They are individuals that live or work and have earned significant credibility within Hispanic communities even though they are both… well… non-Latino Caucasians. While their situations may not seem all that unique, some may find it unusual considering the perception of a cultural disconnect between Caucasians and populations that are commonly referred to as “people of color”. Earning credibility, I believe, is only a part of their stories.

Could their credibility stem from fluency of the Spanish language? Perhaps, but language alone does not ensure cultural relevance. I can recall a time when Robert gave examples of the various rhythms heard throughout Latin-America. Pounding them out on his congas, he performed everything from guaguanco to samba and even voiced a few phrases from the Afro-Cuban Yoruba dialect. From his years of living in Spain and travels to Cuba, he has absorbed the rich textures characteristic of Spanish and Latin-American music. I have also seen Michael interacting with immigrant families from Mexico and Central America, giving advice and guidance about the intricacies of immigration law. He has the ability to make these complex topics accessible to individuals with limited language proficiency and education in a way that only one who has “been there” would understand.

These two “honorary Latinos” can teach a significant lesson when it comes to Hispanic marketing and outreach. Robert and Michael certainly have credibility within their respective professions and although they didn’t necessarily set out to differentiate themselves as relevant brands to Latinos, in essence that is exactly what they have done. Their credibility stems not just from language fluency or a comprehensive understanding of culture, but also from an empathetic connection to the beliefs, values, and attitudes of the Hispanic communities they serve and work with.

So, what can we learn about marketing and outreach from the above examples? Here are few points to consider:

Too often in the U.S., people like to group all non-Caucasian populations into the same category, one that suggests all “people of color” perceive their world through the same ethnic lens. Hispanics are not a monolithic block but an amalgamation of several different backgrounds – Indigenous, Spanish European, and African among others. In addition, the many Latin-American nationalities such as those from Mexico, Puerto Rico, and Cuba, differentiate Hispanic perspectives as well. These are all insights both Robert and Michael understand well. The credibility and respect they have earned is, indeed, honorable.

PS: I released this post on March 17 on purpose. Tell me if you can find the Día de San Patricio (Saint Patrick’s Day) connection in the examples above.