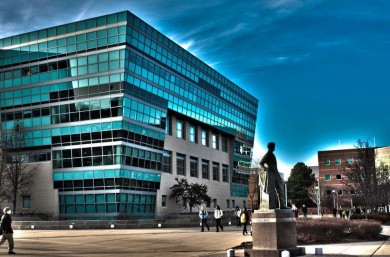 This past year, the Pew Hispanic Center released results from the U.S. Census Bureau that found Latino college student populations meeting a number of milestones in 2011:

These milestones reflect a continuing upward trend now seen by many college admissions departments. Should this be a wakeup call for college administrators? One university in rural northwestern Michigan decided to answer the call.

Located in Big Rapids, Michigan, Ferris State University is a public university with over 14,000 students. I completed my undergraduate studies at Ferris several years ago. As an alumnus, I was proud to learn of a new initiative the university has recently implemented. The Center for Latin@ Studies, a result of years of planning by staff and students alike, held its grand opening in November. The new program was developed to engage the needs of current students and act as a conduit between educational services, businesses, and Latino communities in West Michigan. As a member of the musical group Cabildo, I had the pleasure of being invited to perform at a one-night celebration held in the program’s honor. It was a great time for everyone, especially for the students and directors of the new center.

Tony Baker, a Ferris professor and Grand Rapids Public Schools board member, serves as executive director of the Center for Latin@ Studies. Shortly after beginning his position, Baker vetted Columbia University doctorate student Jessica Cruz for the position of associate director. One of their first initiatives was to facilitate an intercambio cultural – a welcoming space of cultural exchange for students, faculty, and staff. The space has become fully functional and has already begun to close many gaps for students. There are, however, many other plans that will hopefully come to fruition. Among them, the center will soon engage with making connections between Ferris and Latino communities in the surrounding areas. 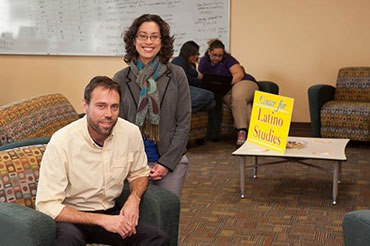 Recently featured in the Grand Rapids Business Journal, Baker outlined some of the outreach goals for the Center for Latin@ Studies.

One example suggested investing within the Grandville Avenue corridor, a predominantly Hispanic location in Grand Rapids, Michigan. By planting the seeds of higher education among families and children in the area, the program hopes future talent can drive local education systems and give students opportunities to work within their communities through college.

Baker and Cruz are also working on collaborations between the Center for Latin@ Studies and other Ferris departments such as the College of Pharmacy and the College of Arts and Science’ Social Work program.

“By sharing resources with each other, we can prepare our students to work in the global community”, Baker explained.

On the heels of this recent effort, Ferris also announced the hiring of former West Michigan Hispanic Chamber of Commerce director Carlos Sanchez as director of the Latino Business and Economic Development Center, another new initiative. This effort aims to provide networking and leadership development for Latino business leaders in West Michigan as well as offer guidance for general market companies seeking to target Hispanic customers. You may recall Sanchez from one of my previous posts about Latinos in West Michigan.

There was a buzz and feeling of excitement in the air the night of the grand opening, even beyond that created by our live music as Cabildo. As I walked through the gathering space of the Ferris Interdisciplinary Resource Center between sets, Baker and Cruz could be seen scurrying between guests, giving tours, and proudly showing off the center’s new home. Like other institutes of higher education, Ferris State University has seen a rise in its Latino student body. According to the Grand Rapids Press, Ferris has 452 Hispanic students. These students make up over 3% of the total student body on campus – a 1.9% rise from 2008. 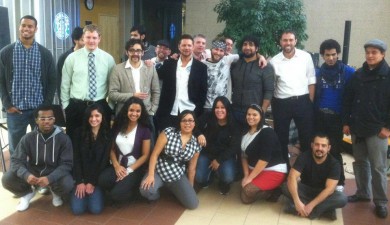 After the music stopped and the grand opening was coming to a close, I was able to spend a few minutes talking to a group of students involved with the Center for Latin@ Studies. They huddled together reflecting on the evening’s activities. Giving me a moment of their time, the students related why they valued the center and what it meant to them. One young Latina immediately shared that the program gave her a sense of home – a sentiment many of the other students agreed with. Another student, not of Latino heritage, mentioned opportunities to better understand and relate to individuals of different cultures. I felt like I was witnessing the beginning ripples of a new movement on campus.

“There are Latino students here at Ferris who have only just recently met other Latinos through our center and they are already in their third year,” Cruz explained.

I thanked the students for their time and departed for the night. As Cruz looked on from the side beaming with pride, I realized this was not the Ferris I knew from years ago.

In light of recent changes in student body of Ferris State University and how they relate to goals for the Center of Latin@ Studies, what opportunities exist for other universities and their stakeholders that are experiencing similar changes? Consider the following:

We hope to see great initiatives arise from the Ferris State University Center for Latin@ Studies. Check back here at Latino Branding Power in the future for updates.