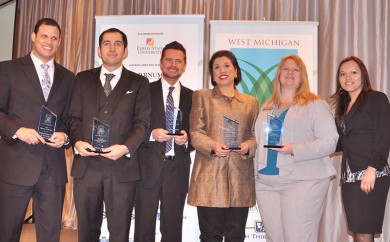 This past week, I received one of the greatest honors since I started Latino Branding Power just over two years ago. On Monday, March 25, at the West Michigan Hispanic Chamber of Commerce Annual Awards Banquet, I received the award for Hispanic Business of the Year in recognition for efforts with Latino Branding Power. It was an incredible honor to be recognized by my peers, the West Michigan Latino business community, and the many people who have supported me over the years.

If for no other reason, the award was truly an honor because it came from the Hispanic Chamber. I have been involved with the West Michigan Hispanic Chamber of Commerce for a number of years now and have always appreciated their support and dedication to our communities. Additionally, the award was an honor because the other nominees were all businesses and organizations that I both admire and respect. What great company to be in. Every nominee in the category was deserving of the honor. 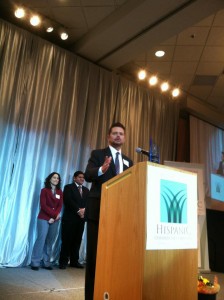 The West Michigan Hispanic Chamber of Commerce was founded in 2006 and is dedicated to increasing the economic advancement Latino businesses and to assist in their professional growth. The Annual Awards Banquet is the organization’s flagship event and typically attracts several hundred attendees. This year the banquet sold out all its 450 seats at the Pinnacle Center in Hudsonville, Michigan.

There were also award winners in other categories. The Hispanic Business Person of the Year was awarded to Gloria Lara, director of Girl Scouts of Michigan Shore to Shore. Champion of the Year, an award to recognize a non-Latino/a for contributions to the West Michigan Hispanic community, was given to Angela Hanks of Chemical Bank. Orlando Bonifacio of Universal Income Tax & Accounting Services was awarded New Business of the Year. Friend Salvador Lopez was honored with the Young Entrepreneur of the Year award for his work with El Centro Translations. It was great to share the limelight with these talented and dedicated individuals. 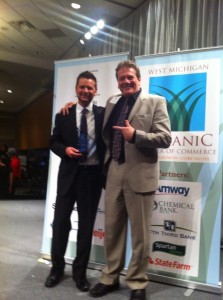 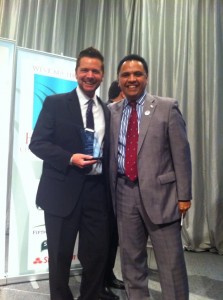 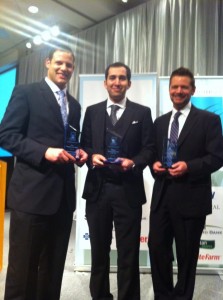 With the guys, Orlando and Sal 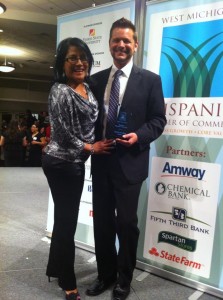 With my wife Evelyn

It was a night not to be forgotten. A big thank you is due to Alan Headbloom. During my acceptance speech I also thanked Carlos Sanchez, Paola Gonzalez, and Veronica Ramirez for their support on the chamber, my wife Evelyn for her unconditional love and guidance, and I recognized the memory of long time West Michigan Hispanic Chamber of Commerce member and cousin Genaro Bravo (you would have been proud). Thank you again to all. 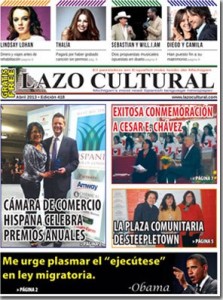